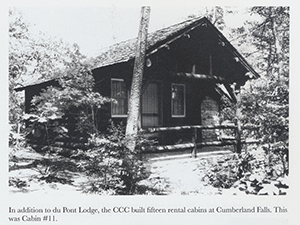 Kentucky State Parks are full of rich history that can be seen throughout the state in various ways. When it comes to structures, those from pioneer days to present are represented, but it is the CCC (Civilian Conservation Corps) lodges, shelters, cabins (photo at left is from the book, Kentucky's Civilian Conservation Corps by Connie Huddleston) and trails that are at the heart of what made the development of Kentucky State Parks possible. FDR’s CCC, part of the New Deal, functioned to provide relief for unemployed, unmarried men in exchange for labor on public projects from 1933 to 1942 and is responsible for many structures at John James Audubon State Park, General Butler State Resort Park, Natural Bridge State Resort Park, Pennyrile Forest State 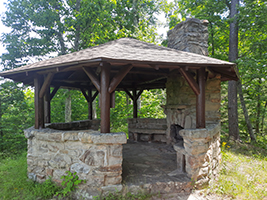 Resort Park, Pine Mountain State Resort Park and Cumberland Falls State Resort Park. In an ongoing effort to maintain the integrity of our “parkitecture,”  the Dept. of Parks performs routine maintenance to in-depth renovations when needed to keep the story of the CCC’s commitment alive.

The historic buildings at Cumberland Falls bring to life some of these stories that are kept intact by preserving the integrity of its structures built between 1933 and ‘37. Some of these historic buildings have been recently renovated by Kentucky State Parks’ special projects crew (P-9s) for current and future generations. One structure is a hiking shelter located off trail 11 that one can easily 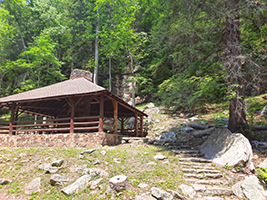 access from Hwy 90. This shelter is perched at one of the highest points of elevation within the park making it a perfect place to bring a picnic and enjoy the view.

The other structure is a larger picnic shelter that one can drive right up to making it perfect for a family gathering or celebration. This shelter is located just upstream from the Gatliff Bridge. One can witness the skill and craftsmanship these men had, to create such structures that were built to last.

Other CCC-built facilities guests can see at Cumberland Falls SRP today include the Lodge (burned but rebuilt in early forties by the WPA using original CCC plans and stonework), 6 one-bedroom cabins (there were originally 15), the hiking shelter on trail #9, the fire tower, plus 20 miles of trails. Many of these trails have stonework that act as bridges over waterways, steps down steep hillsides and rock wall to prevent erosion. 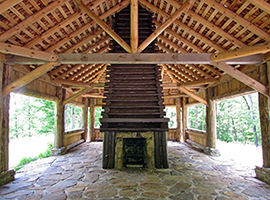 KSP’s first official park has also seen some recent CCC renovations. This shelter in the old campground area at Pine Mountain State Resort Park in Pineville was one of the earlier projects from the CCC from around 1935. It is the only predominately log shelter in the park, with the rest being mostly stone with log beams and roof.  This shelter was recently rehabbed by the P9 crew from the ground up. The work they put into the project, hand scraping the logs, just as the CCC would, and utilizing other early techniques, will be appreciated for decades to come.

This shelter by the Laurel Cove Amphitheater at Pine Mountain was built mainly from stone cultivated from the surrounding creek beds, mountains, and rock quarry, also around 1935. It is the quintessential representation of “national park service rustic” architecture. The steel bands, pegged logs, and hand placed stone construction makes this shelter one of the most beautiful at the park.  It was restored by Kentucky construction firm of Anderson and Rogers a few years ago.